Learn now our faculty, staff and students are bringing together the elements of the Land-Grant mission through research, education and community engagement. 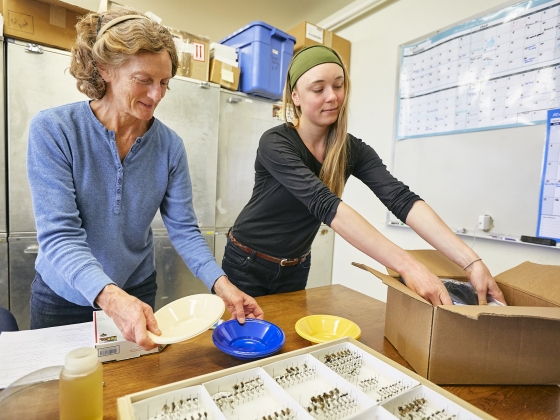 BOZEMAN – Declining bee populations have been widely discussed by scientists and the public over the past decade. But while colony collapse disorder and diseases impacting European honey bees are well known, native bee populations are frequently overlooked. A team of researchers in Montana State University’s Montana Entomology Collection (MTEC) are working to fill that knowledge gap and learn more about Montana’s wild bees.

“We are in year two of a 15-year project to document the 500 to 1,000 species of native bees in Montana,” said Michael Ivie, an associate professor of entomology in the Department of Plant Sciences and Plant Pathology in MSU’s College of Agriculture and the MTEC’s curator. “Montana is a huge area, and our knowledge is so limited that we don’t have a more accurate estimate of how many species are here.”

The project started when one of Ivie’s graduate students did a study of the bumble bees of Montana in 2016, and it became obvious how many holes there were in the knowledge of Montana’s native bee diversity. Ivie secured funding from the Montana Department of Agriculture in 2017 for the “(Wild) Bees of Montana Project,” to create a complete collection of samples and determine just how many species of native bees the state has. He and Casey Delphia, the project’s chief taxonomist, recruited a graduate student and volunteers to help. But to examine all 147,000 square miles of the state would require more manpower than they could muster, and to fill that need, an unlikely partnership was created.

Read more about the "(Wild) Bees of Montana" project here.

BOZEMAN — Illustrating the widespread growth of an industry that is gaining a foothold in Montana, roughly 170 people convened at Montana State University last week to improve their knowledge of malting, the process of preparing barley for making beer.

The 2019 Craft Malt Conference on Feb. 2-3 capped a smaller, weeklong class in which participants learned about each step of the malting process, from selecting the most suitable barley to testing the quality of the finished product.

Malting — which involves soaking and partially germinating grain, then drying it to preserve the resulting sugars and enzymes — can mean the difference between a Pilsner and a rich, caramel-flavored Scotch ale. More subtle variations in the process can produce unique flavors in craft beer.

"Craft malting is (in a similar situation) as craft brewing was a decade ago," when microbreweries were on the rise, said Hannah Turner, one of the malting class's three instructors and a research associate in MSU's College of Agriculture.

MSU recognized for commitment to protecting bees and other pollinators

BOZEMAN — In an effort to support healthy populations of bees and other pollinators, Montana State University has joined a nationwide initiative certifying the university's pollinator-friendly practices and programs.

In November, MSU was designated a Bee Campus USA by the international nonprofit Xerces Society for Invertebrate Conservation, becoming the first Montana campus to qualify and enroll. The program includes 58 other campuses nationwide.

"This recognizes some incredible work on campus that many people might not be aware of," said Mathew Bain, program coordinator in MSU's Office of Sustainability.

Bee Campuses are required to have pollinator-friendly habitat that includes native plants, engage in outreach programs and teach courses related to pollinators, among other things.

"Becoming a Bee Campus builds upon, and unifies, ongoing research and outreach efforts aimed at promoting pollinator health at MSU and supports student and community member involvement," said Michelle Flenniken, assistant professor in the Department of Plant Sciences and Plant Pathology in MSU's College of Agriculture. 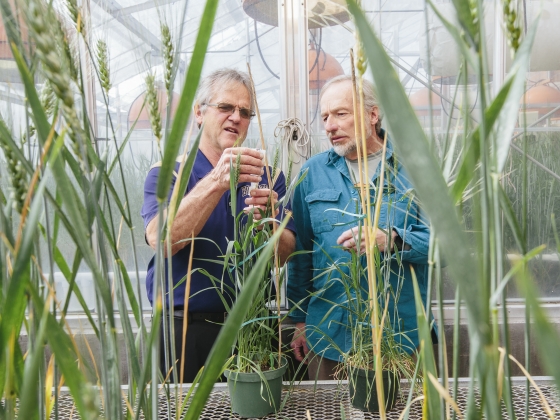 BOZEMAN – A new program at Montana State University aims to increase the amount of money from royalties on crop variety licenses that goes back into crop breeding research.

MSU Vice President of Research and Economic Development Renee Reijo Pera said that is in addition to the 35 percent the university had already been sending back to the breeders.

“The new program means that now 65 percent of royalties will support breeders and their research programs,” she said. “This is in keeping with MSU’s land-grant mission of investing in research to benefit the state of Montana and help grow its economy.”

MSU’s research into the genetics and breeding of cereal grains and pulse crops has led to the development of crop varieties that offer greater yields and improved resistance to diseases and pests. The research programs are carried out by MSU faculty, staff and students in Bozeman and at MSU’s seven agricultural research centers across the state.